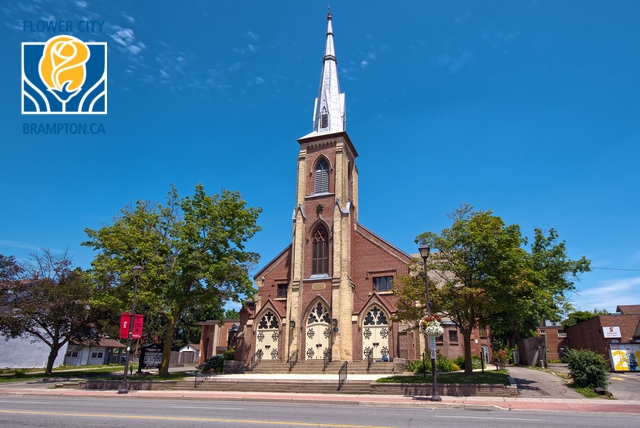 The beginning of this congregation goes back to 1822. The historical church, built as a Wesleyan Methodist Church in 1867 and extensively renovated in 1887, is the oldest church in Brampton. The exterior brickwork and bell tower of this Gothic revival building have been restored. The sanctuary has wonderful woodwork, a gallery with an intricate wrought-iron railing, and over 40 stained-glass windows. The beautiful Casavant pipe organ was installed in 1924, a gift from the Duggan family in memory of those who served in the First World War. In 1982, people from Grace United formed a non-profit group to build Grace Court, a seniors’ apartment building in downtown Brampton in recognition of the need for affordable seniors’ housing in the area. More recently, in 2009, the parts of the building outside of the sanctuary became a community hub known as Grace Place, where over 40 community groups deliver their programs and services to the people of Brampton. Grace Church today has become known as the church with a heart in the heart of the city. As part of Digital Doors Open, visit the Doors Open Brampton YouTube channel and learn about this extraordinary place, take a virtual sanctuary tour, hear all about the congregation’s 198-year history, and take a look at how the Casavant pipe organ works and what it sounds like.